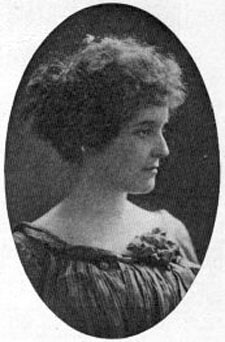 Zona Gale was the American writer who won the Pulitzer Prize for drama in 1921 for her play “Miss Lulu Bett”. Apart from being the first woman to win this prize, she also lived a generally impressive life full of liberty, creativity and social consciousness.

She was born on August 26, 1874 in Portage, Wisconsin. At the age of seven (~1881) she is purported to have written her first book (unpublished and apparently lost to time) with her first attempt at getting published at the ripe old age of 13 (~1887).

Undaunted by this early rejection, she went on to graduate from the University of Wisconsin in 1895 with a Bachelors in Literature. Upon graduation she began working for the Evening Wisconsin and Milwaukee Journal where she worked as she continued her studies, eventually graduating with a Masters in Literature in 1899, again from the University of Wisconsin.

In 1901 she moved to New York City to work at Evening World until she became a freelance writer in 1903, selling her first short story to Success magazine [titles pending].

After a productive period in New York, she returned to Portage to live.

From here, she seems to find a a groove that suits her and she begins her creative work in earnest. She also begins to be more substantially involved in various liberal civic causes, among which include :

She did marry, though later in life at the age of 54 (1928) to William L Breese. She died of pneumonia in a Chicago hospital on December 27, 1938. One additional novel was published posthumously, Magna (1939).