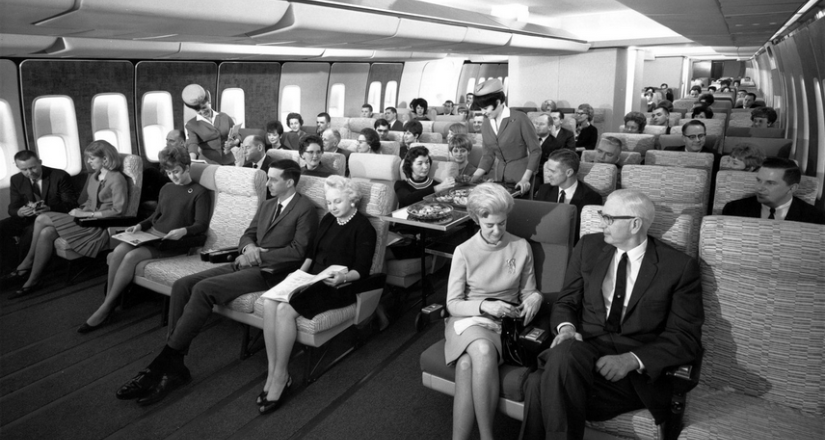 There are several very striking differences in these photographs.

Having been fortunate enough to travel a little in my life, I can say with certitude that air travel is a necessary EVIL if you want to see the world, but an EVIL none the less.  I can’t speak for the real comfort of a flight in the 60’s.  There are some very real discomforts that come naturally from defying gravity that way.  However, I can see from the photograph that, even tall persons could sit as comfortably as they would have on a sofa.

There is definitely room for modern airlines to improve, but, given the current state of affairs, I don’t see that happening anytime soon.   A flight to Hawaii using the plane similar to the one shown in the 1960’s photograph had been advertised for $460.  A search for a flight to Hawaii from San Francisco, CA in 2014 returned at $475.  It doesn’t take an economist to see that something went wrong in the business model and as a result, something had to give.  Is it any real shock that it is space?  With rising operating costs and greater and greater consumer demand for cheap flights, how can we realistically expect a business to give us more?  In the end we have to ask ourselves what kind of consumers are we:  the kind that accepts any condition for the cheapest price, or the kind that considers that in-flight time valuable enough that we are willing to pay a little more for it?

Either way, as a consumer, I still expect the airlines to stop treating me like cattle and remember that I am more than just the few dollars they’ve asked me to give them.  Ultimately, I don’t set their prices, I just decide if I am going to pay them, and for some airlines, because of the in-flight conditions, the answer is a resounding NO!