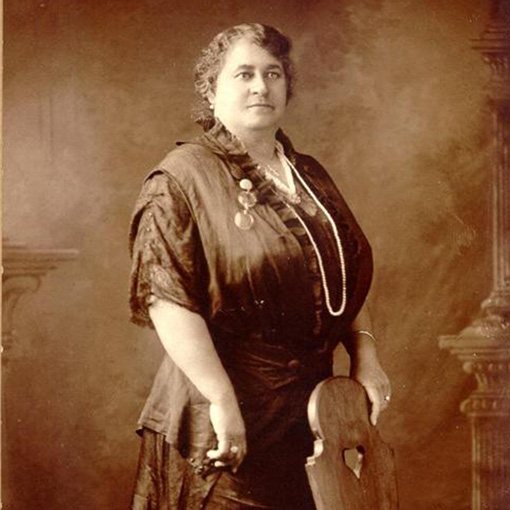 Maggie Lena Walker was born Maggie Lena Draper in Richmond, Virginia on July 15, 1864 to Elizabeth Draper, a former slave and assistant cook for Elizabeth Van Lew, an abolitionist, and Eccles Cuthbert, an Irish American who had met her mother on the Van Lew estate.  Her parents were never married.  Her mother married William Mitchell, the butler of the Van Lew estate in 1870 and shortly after the family moved away from the estate to a small house of their own.

In 1876 William drown in a river.  His death, ruled a suicide by police but contested in the mind of Maggie, left the family in severe poverty.  Her mother began a laundry business where Maggie assisted with cleaning the laundry for their white patrons.  During this time she became increasingly aware of the disparity between the quality of life for people of color vs whites, an awareness that would eventually lead to her devoting her life to narrowing that gap.

Maggie was educated, attending both Lancaster School and the Richmond Colored Normal School, both institutions dedicated to the education of African Americans.  While attending the Richmond Colored Normal School, she joined the fraternal order dedicated to the advancement of the social and financial standing of African Americans known as the Independent Order of St. Luke.

In 1883, she completed her training as a teacher and returned to Lancaster School to teach where she remained until 1886 when she was forced to quit after marrying Armstead Walker, Jr. as the school had a strict policy against married teachers.

For the next decade, she continued her work for the Order of St-Luke and focused on her family.  During this period she gave birth to her first son, Russell (1890) as well as her second, Armstead, who tragically passed at the age of 7.  In 1895 she became the grand deputy matron in the Order and established a youth branch of the order with the goal of inspiring social consciousness in young African Americans.  In 1897 she gave birth to her second son, Melvin.

In 1899, she became the Grand Secretary of the Order of St. Luke’s.  As she assumed control of the organization, the Order was on the verge of bankruptcy.  In 1901 she revealed her plan to save the order, with which she was able to follow through on each item.  In 1902 she founded the St. Luke Herald, a news organization dedicated to distributing the Order’s news to local chapters and assisting with it’s educational work.

In 1902, she opened the St. Luke Penny Savings Bank, the first known bank dedicated to the cause of the African American community, making her the first woman to become the president of a bank.  Additionally, in 1905, she opened the a department store, St. Luke’s Emporium, which offered African-American women work opportunities as well as giving black communities access to cheaper goods.

In 1915, Russell Walker mistook his father for an intruder and shot him, killing him.  Around this time, Maggie also developed diabetes.

Undeterred, in 1921, she unsuccessfully ran for the superintendent of public instruction seat on the Republican ticket.  She continued her work with St-Luke’s, which was continuing to have favorable results.  By 1924, the bank served a membership of more than 50,000 people in 1,500 local chapters, and surviving the Great Depression as many other banks failed by merging it with two other banks.

In 1929 she resigned from the position of President of the bank, ending a 27 year successful tenure and leaving a legacy that continues to this day under the name of Consolidated Bank & Trust Co., making it the oldest black owned bank in the United States.

Through the course of her impressive life, she also served on the board of trustees for several women’s groups, including the National Association of Colored Women and the Virginia Industrial School for Girls, though she did not limit herself to women’s causes.  She served locally as vice president of the National Association for the Advancement of Colored People (NAACP), an organization for which she also served on the board.  She additional served a s a member of the Virginia Interracial Commission.

During the last few years of her life she was confined to a wheelchair.  She passed away December 15, 1934 at the age of 70 from complications related to her diabetes.

Her residence, located at 110 1/2 East Leigh Street Richmond, Virginia, a section of town that was known as the “Harlem of the South”, was purchased by the National Parks Services and turned into a National Historic site in 1979.  The furnishing in her home, built in 1883, are original family pieces.